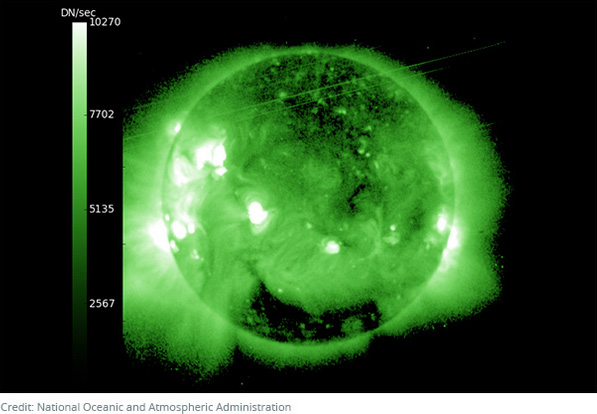 The pressure of the solar winds shape Earth’s magnetic field, called the magnetosphere, into a comet-like form with a tail extending away from the sun.

The Sun’s Cycle and Its Effect on Earth

As the sun approaches its solar maximum—the peak of intensity in the sun’s cycle—solar flares and associated coronal mass ejections occur more frequently. These eruptions on the sun launch charged particles into space, called solar wind.

Ninety-three million miles from the sun, Earth is surrounded by its own magnetic field—generated by its liquid metal core—that often serves as a cocoon protecting Earth, and the satellite technologies in its orbit, from the effects of solar wind. The pressure of the solar winds shape Earth’s magnetic field, called the magnetosphere, into a comet-like form with a tail extending away from the sun.

It’s likely you’ve heard of aurorae, the beautiful natural light displays that can sometimes be seen near the Northern and Southern poles. The Aurora Borealis, or "Northern Lights," and the Aurora Australis, or "Southern Lights," are a direct result of a magnetic reconnection between Earth’s magnetosphere and the solar wind. When conditions are right, charged particles emitted from the sun can actually enter and energize Earth’s magnetosphere, where it is then directed to the poles and collides with atmospheric constituents and fluoresce to produce the aurora.

During these reconnection events, resulting powerful electrical currents flow to offset the energy released, usually in an east-west orientation above Earth. During a geomagnetic storm, the most damaging effects happen when an eastward current changes direction. In this situation, ground-induced voltages can occur.

When a transmission line is in service, it has a constant voltage and current running through it. Voltage is needed to help “push” the current through the line; the more current in the line, the more voltage is needed to keep the current moving through the line. When a geomagnetic storm induces transmission lines with additional, unregulated current, but the output of voltage stays the same, mechanical failures can occur, causing large power outages and damage—all in a matter of seconds. Such current increases can destroy transformers, trip protective equipment, overload transmission lines, and damage generators.

While the physics surrounding solar magnetic disturbances are still not fully understood, it is clear that if these events can be predicted, we stand a better chance of mitigating damage than if we didn’t know they were coming. The National Oceanic and Atmospheric Administration (NOAA) closely monitors space weather, and when an event occurs on the sun that can have an impact on Earth, the event is given a rating using the K-index. The index is a scale from 1-9, where 1 is calm and 5 or higher indicates a geomagnetic storm.

In extreme cases where the New England power grid may be affected, the ISO can implement actions from its system operating procedure to help prepare the region’s power grid for GICs. (See CROP.24003: Geomagnetic Disturbance.) Those actions may include redispatching generators to outputs that maximize their ability to respond to current and voltage fluctuations resulting from GICs; working with transmission operators to discontinue maintenance work and restore out-of-service high-voltage transmission lines, wherever possible; and managing the amount of electricity that flows on transmission lines and facilities.

To view current space weather conditions, visit the NOAA/NWS Space Weather Prediction Center. To learn more about the solar cycle, how the sun’s activity can affect us on Earth, and the latest scientific news about the sun, visit NASA’s The Sun-Earth Connection: Heliophysics pages.