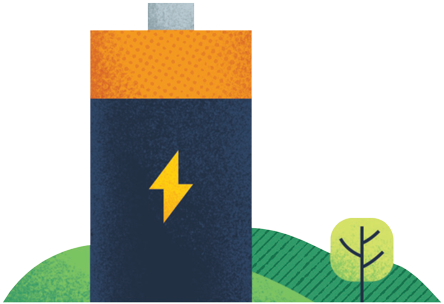 A History of Energy Storage in New England

New England has a long history of operating its electricity system with large-scale energy storage. Pumped-storage hydropower, for example, has proven to be valuable for producing power to respond to system emergencies, as well as during times of very high demand.

A flywheel system, another type of energy storage, was part of the ISO’s 2008–2015 pilot program to encourage alternative technologies to participate in wholesale electricity markets.

Looking to the future, other possibilities in New England may well include using the batteries in electric and plug-in hybrid electric vehicles to draw electricity from the grid during off-peak or low-price periods (typically on nights and weekends). Batteries in these vehicles could also supply power to the grid when needed. Electric vehicles might also provide regulation services by adjusting their charging and discharging patterns.

The ISO is also studying the potential use of storage devices, including batteries, as transmission assets.

With increasing amounts of intermittent energy sources joining New England’s resource mix, the need to balance a more complex electricity grid has emerged. For example, with solar and wind now dominating the queue of proposed energy projects in New England, the region will need flexible resources to meet fluctuations in supply and demand that occur throughout the day. In the past decade, emerging technologies, such as batteries, have brought the region efficient energy storage in smaller, modular packages to help balance intermittency.

Batteries can help store surplus energy from renewable resources that might otherwise be wasted. That stored energy can be used later, helping to serve electrical demand at night or on a calm, cloudy day.

Pumped-storage hydropower, which has long been a part of New England's resource mix, illustrates the principles of energy storage—and helps explain how batteries interact with the grid. At a pumped-storage hydro facility, stored energy takes the form of a full reservoir. That stored energy can be dispatched to the grid as electricity at a moment’s notice. Similarly, a fully-charged battery contains energy that is available for immediate use. In both cases, once stored energy is depleted, it must be replenished.

In December 2016, the Federal Energy Regulatory Commission (FERC) accepted ISO-NE’s proposed market rule changes, enabling energy storage resources to participate in the Day-Ahead and Real-Time wholesale electricity markets while continuing their participation in the Regulation Market. These changes, which went into effect in December 2018, provided greater opportunities and incentives for energy storage to participate in New England’s wholesale electricity markets.

Since the introduction of the Energy Storage Device Project in 2019, market participants with front-of-the-meter batteries became eligible for the Real-Time and Day-Ahead electricity markets in addition to the ancillary service markets. Battery projects are also competing in the Forward Capacity Market, with more than 700 MW of battery storage securing capacity supply obligations in the most recent Forward Capacity Auction, held in February 2022.

The ISO’s compliance proposal will create new possibilities for DERs of all types, including (but not limited to) batteries, as well as emerging technologies such as electric vehicle chargers  and grid-responsive water heaters. These resources will serve the region through aggregations capable of participating in New England’s wholesale power markets.

How Batteries Work with the Grid

If interconnected to the high-voltage electric transmission system, most batteries can react almost instantly to changes in supply and demand, helping to smooth out fluctuations.

When batteries are connected to the grid in front of the meter, they can function as demand resources; resource owners can choose to draw electricity from the grid if prices are lower, and then sell it back into the ISO’s energy markets when prices are higher.

When located behind the meter and within a utility’s distribution system, batteries can be used to time-shift demand, enabling other energy sources to be used as they become available or are more cost-efficient. For example, solar energy is not produced at night, but energy stored in batteries can help fill that supply gap.

As a regional transmission organization (RTO), the ISO coordinates how transmission lines, power plants, and other resources connect to and operate in alignment with New England’s high-voltage transmission system. The ISO’s Interconnection Process enables new resources to request connection to the region’s transmission grid to supply electricity to New England. Battery storage projects made up about 20% of the proposed generating capacity in the ISO Interconnection Queue as of May 2022, compared to 10% in July 2020—and less than 1% in May 2017.

In addition, the New England states have taken steps to support the expansion of battery technology.

The Need for Flexible Energy Resources and Storage Will Continue

Changes to the resource mix and load patterns in New England will reveal further opportunities for energy storage and supply solutions to complement an evolving power system. What is certain is that these solutions, including batteries, are on track to play an important role in New England’s clean energy transition.