Before industry restructuring and creation of ISO New England in the 1990s, New England saw little investment in transmission infrastructure. Over the past 20 years, the ISO’s continuous study of the transmission system has helped guide cooperative regional investment that not only improves reliability but also enables the competitive markets to work as designed. Transmission system upgrades allow the ISO to dispatch the most economic resources throughout the region, allow less-efficient resources to retire, and enable the interconnection of power plants with lower emissions.

Based on the needs described in the ISO’s Regional System Plans, New England’s transmission owners have initiated projects reinforcing transmission-serving areas that have experienced significant load growth, such as northwestern Vermont. Projects have also been initiated in critical load pockets, such as Southwest Connecticut and Boston, allowing the import of power from other parts of the system. New interconnections with neighboring power systems also have been placed in service. Together, these interconnections enable the import of competitive and emergency supplies of electricity from New York and eastern Canada. The region met 20% of its energy needs with imported electricity in 2020.

As of the June 2021 Regional System Plan Project List, 834 project components had been placed in service and an additional 47 projects were anticipated over the next 10 years to ensure that electricity continues to move reliably and efficiently across the region. 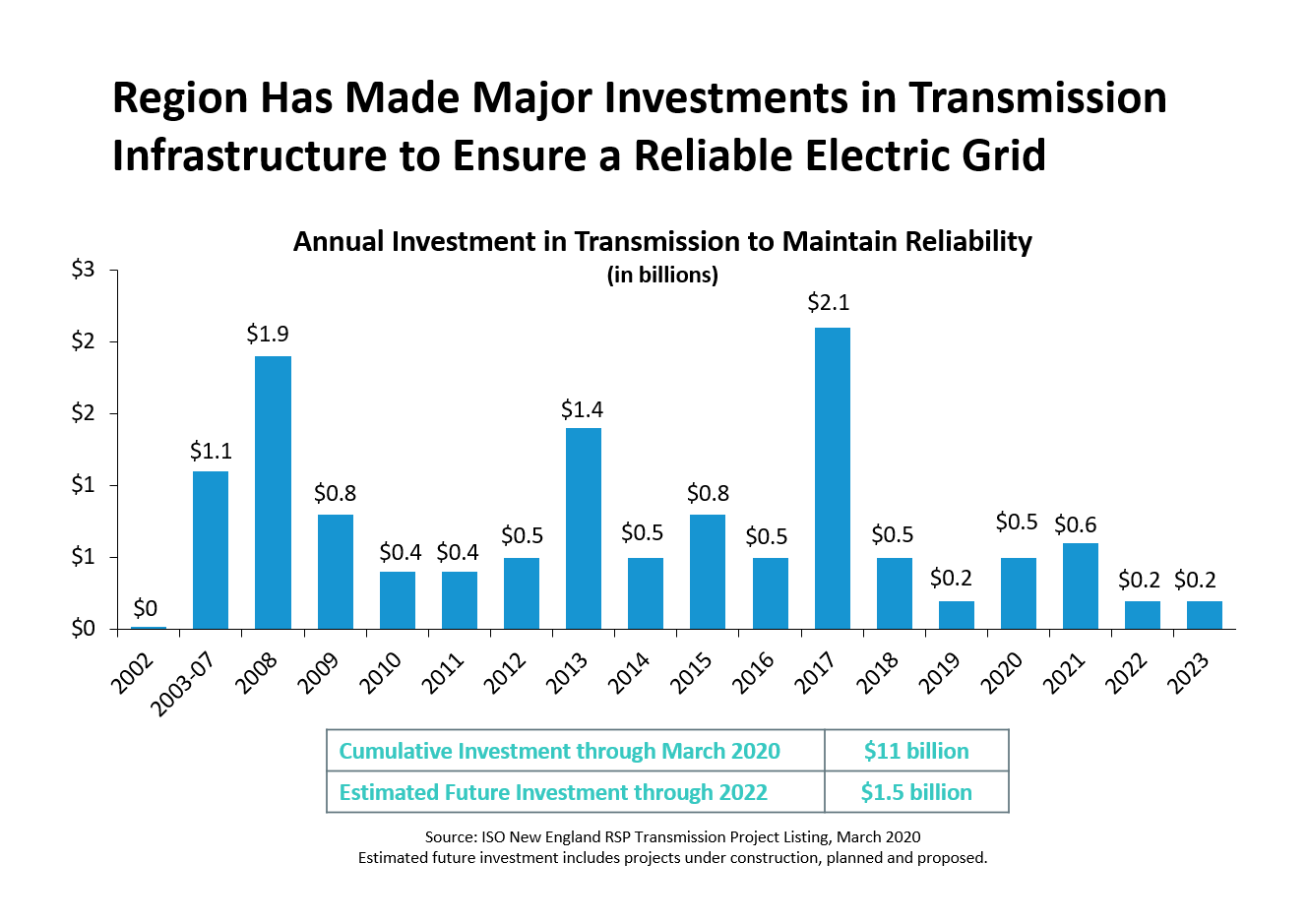 Transmission system upgrades have nearly eliminated congestion costs in the New England energy market and, with the aid of low natural gas prices and other factors, have helped drive down and mitigate “uplift” payments to run specific generators to meet local reliability needs. 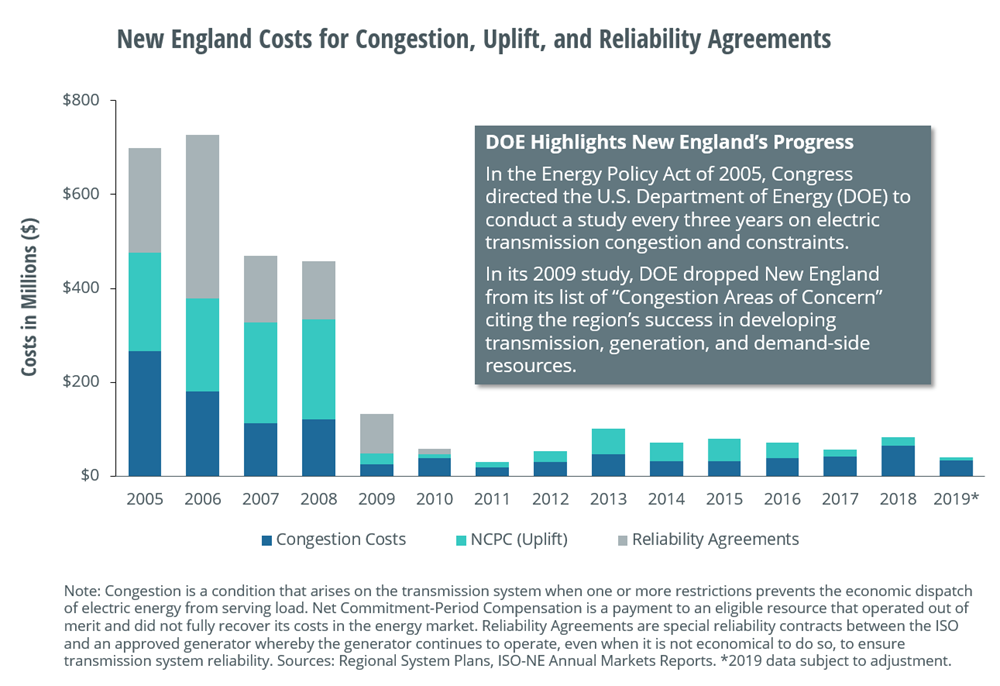 Region Will Need Investment in the Superhighway for Moving Clean Energy

Even with substantial investment made to modernize the transmission system and enable the free flow of low-cost power, additional transmission (and distribution) system upgrades will be needed to accommodate large amounts of diverse clean-energy sources—from large-scale offshore wind, remote Canadian hydropower, and hundreds of thousands of distributed solar and storage sources. Think of the grid as the superhighway for moving the clean-energy that ultimately will be fundamental to reliably converting millions of vehicles and heating systems in buildings to electricity.

Almost all of the roughly 18,000 MW (nameplate) of wind power being proposed regionally (as of January 2022) would be offshore of Massachusetts, Rhode Island, and Connecticut, with most of the remaining located onshore in Maine. (Historically, almost 70% of proposed new megawatts in the ISO Generator Interconnection Queue have ultimately withdrawn.) Read more about proposed new resources in the region.

Because of the large distances from some of the proposed onshore wind power projects to the existing grid, major transmission system upgrades will be needed to deliver more of this power from these remote, weaker areas of the system to far-away consumers. Proposed offshore wind projects closer to New England load centers may require fewer upgrades to the existing grid, but building wind turbines offshore is typically more costly than placing them on land. In 2015, the ISO improved its interconnection study process for elective transmission upgrades (i.e. not reliability-driven upgrades) and introduced new rules that ensure that renewable resources are able to deliver capacity and energy into the wholesale electricity markets. ETUs are transmission lines funded by private parties—not through regional cost-sharing. While not necessary from a reliability standpoint, they can help enhance generator deliverability or facilitate the integration of renewable resources, such as remote wind resources, by enhancing portions of the grid.

Today, private developers are competing in state procurements to build transmission projects that would enable the delivery of thousands of megawatts of clean energy, mostly from wind resources in northern Maine and hydro resources in Canada (not all proposed wind projects in New England would be delivered through ETUs). As of September 2021, 14 ETUs were proposed to be built. State procurement programs will be major deciders of which projects will move forward. Coordination of energy policy among multiple states is challenging, particularly when infrastructure needs to be built across multiple states.

In 2017, the ISO implemented a new “clustering” methodology that enables interconnection requests from multiple generators and ETUs in the same area to be studied together. This is helping to advance the requests in northern and western Maine where thousands of megawatts of proposed new resources, mostly wind, are seeking to interconnect to the regional grid. It may also help generators save on interconnection costs. The first cluster of resources is proceeding through the interconnection study process on the basis of these new rules.