New England typically reaches its highest demand for electricity during the summer when warmer weather leads to increased use of energy-intensive air conditioning.

Until 1989, New England was a winter-peaking system, and in the early 1990s, the region had nearly twin winter and summer peaks. Growing use of air conditioning and a decline in electric heating contributed to this dramatic change.

The region’s millions of households and businesses create the demand for electricity on the power grid, which must be produced the instant it is needed because electricity cannot easily be stored in large quantities. (Learn how ISO New England runs the power grid.)

Peak demand is the highest amount of electricity used in a single hour, and the ISO must ensure that the region has sufficient power resources to meet the peak. The chart below shows the days with the highest peak demand recorded in New England since the ISO began managing the power grid in 1997. The highest peaks typically occur during the work week in summer. Note that as demand for electricity from the regional grid declines, these records are harder to break. Nevertheless, high spikes in demand still occur, and New England’s power system must remain prepared to meet those peaks even if they aren’t historically high. 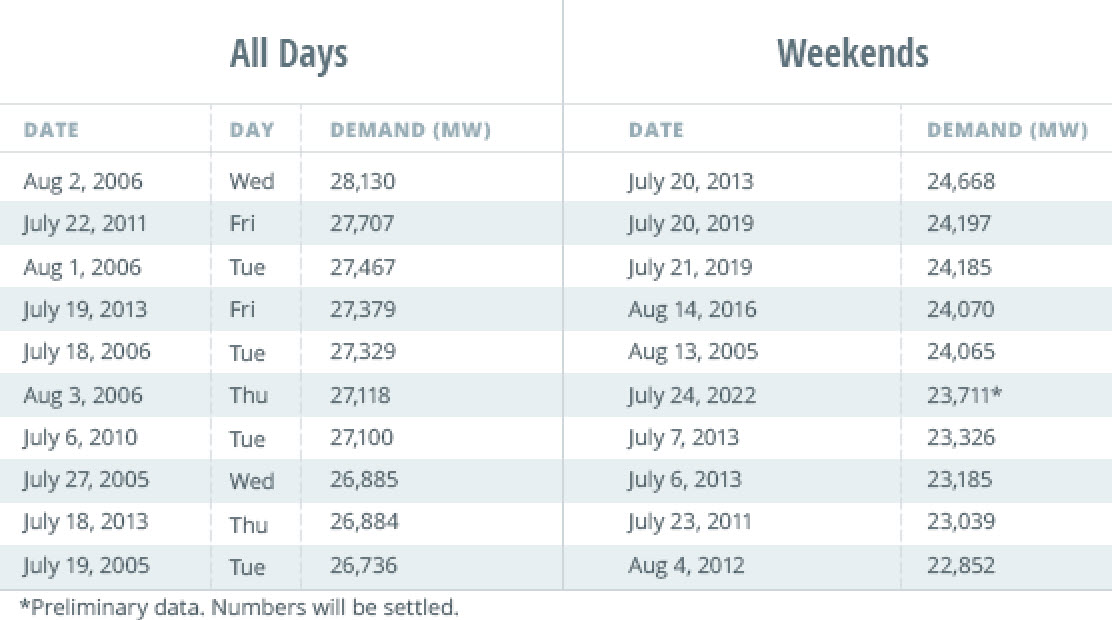 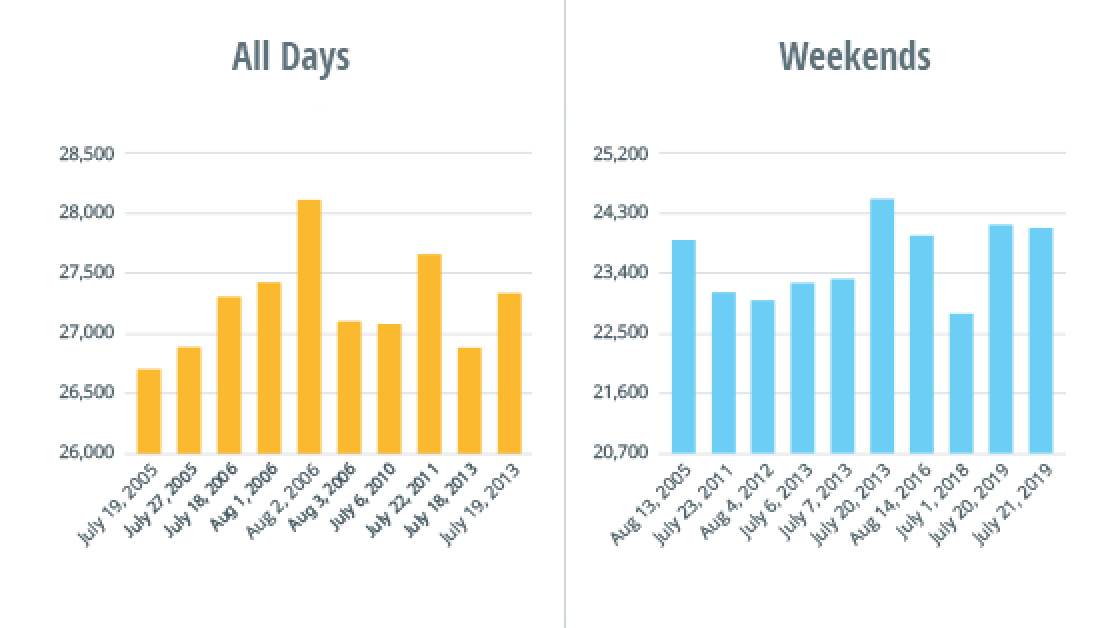 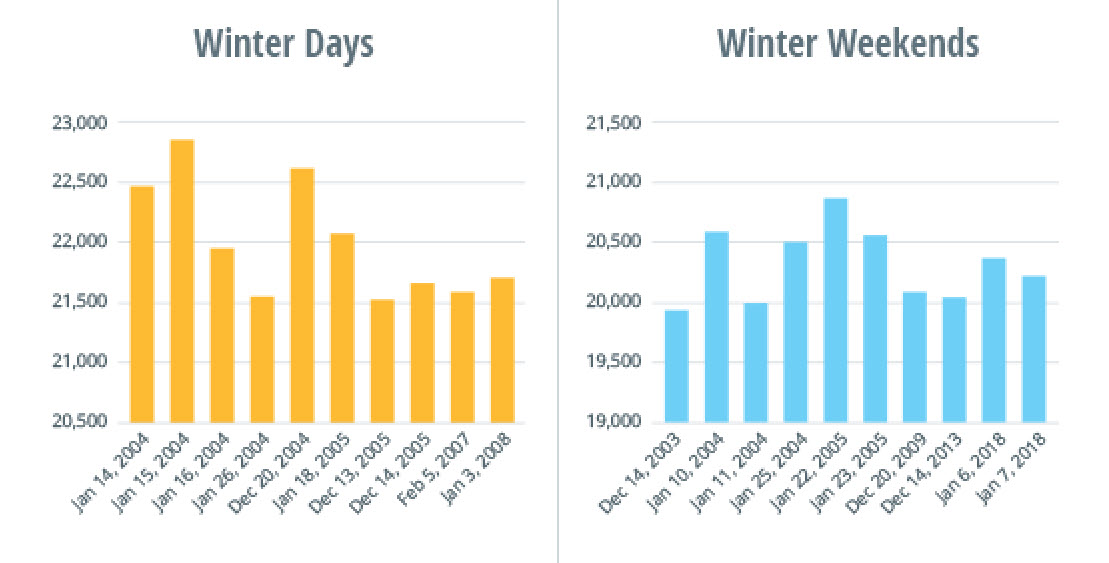 Data for the top ten demand days comes from the Daily Summary of Hourly Data Report, available on the Zonal Information page. The daily peak load for the regional system is included in the “System_Peak” column on the “ISONE CA” worksheet. The “DT” (date type) column represents the day of the week, where Monday is 1 and Sunday is 7.

Annual energy use is lower now than it was in the early 2000s. But as shown in the chart below, levels of peak demand—the highest amount of electricity used in a single hour—have not fallen. New England’s power system is planned and operated to serve demand during these peak hours, which still see spikes on hot, humid summer days, even if annual use is not historically high. 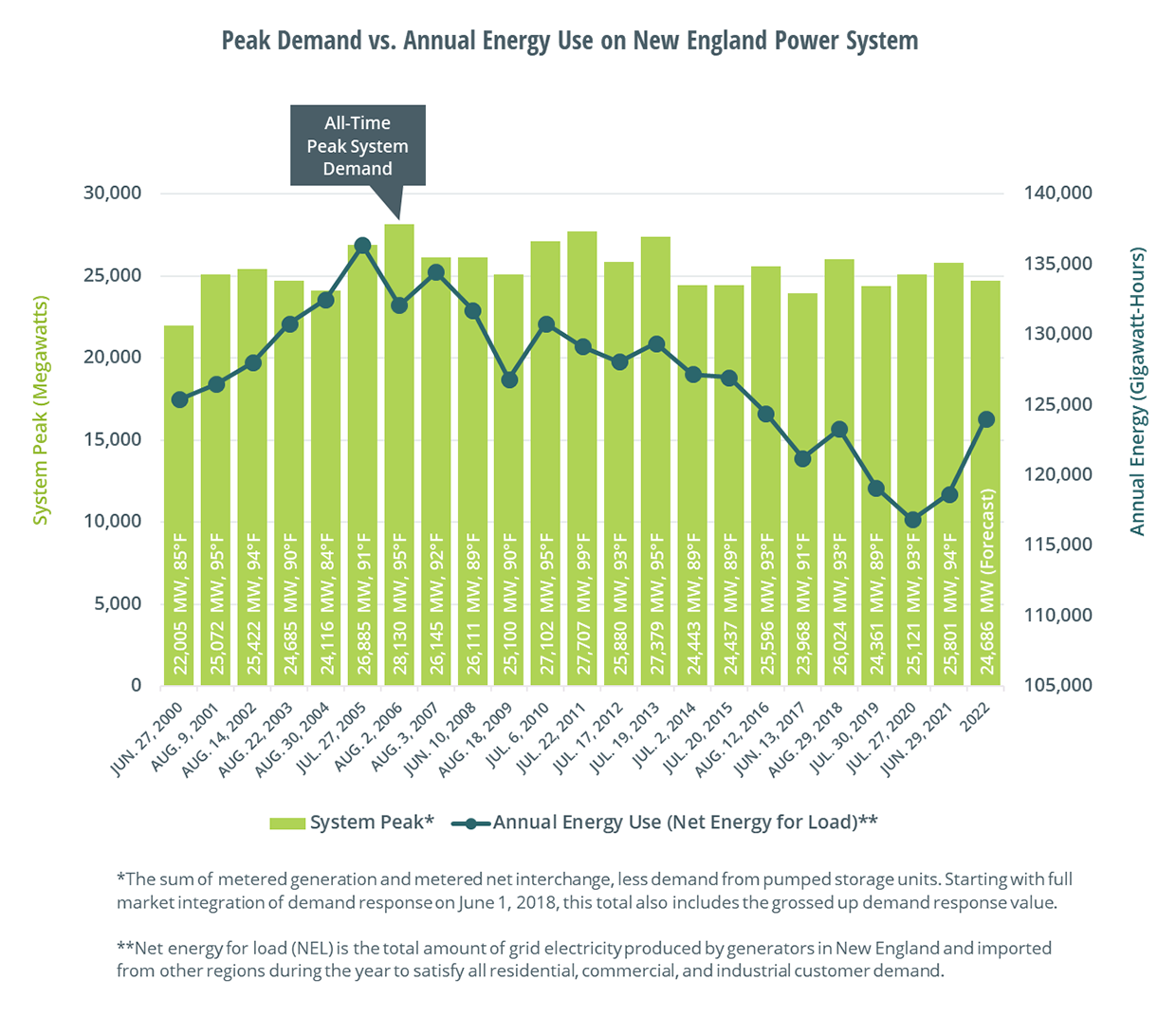 Today, 20% of total system capacity is provided by distributed energy resources that reduce demand from the grid and the need to turn on or build power plants and other generating resources.

State policies and wholesale market revenues are stimulating the rapid growth of energy efficiency (EE) and demand response. New England states invest billions of dollars on EE programs that promote the use of energy-efficient appliances and lighting and advanced cooling and heating technologies (nearly $5.8 billion on EE programs from 2015–2020 and another $11.5 billion between 2022 and 2031). Over 2,000 MW of EE measures and over 750 MW of demand response can reduce electricity demand from New England’s power grid—that’s nearly 9% of system capacity acquired in the Forward Capacity Auction. And New England is first in the nation to innovate and enable demand resources to fully participate in the energy and reserve markets.

Providing incentives for local/residential solar power is also a top priority for New England policymakers, with the states spending billions of dollars on making solar energy affordable for consumers. In 2010, New England had about 40 MW of behind-the-meter solar photovoltaic (BTM PV) resources. Today, more than 240,000 installations span the six states, with a combined nameplate generating capability of approximately 4,800 MW. The region is on track to exceed 10,000 MW over the next decade. Though these resources don’t participate in the markets, the markets are flexible to changes in grid demand, so grid electricity is not over produced—or over purchased. See how hourly load varies by season and with the impact of solar power.

The ISO forecasts that both energy use and peak demand will increase in New England over the 10-year period. The primary factors for this increase are the additional energy and loads resulting from the new electrification forecast for electric vehicles (EVs) and air-source heat pumps (ASHPs). The ISO develops the gross long-term forecast for electricity demand using state and regional economic forecasts, years of weather history in New England, and the EV/ASHP forecasts. Results of both the ISO’s energy-efficiency (EE) forecast and solar photovoltaic (PV) forecast are applied to the gross forecast to develop a net long-term forecast. 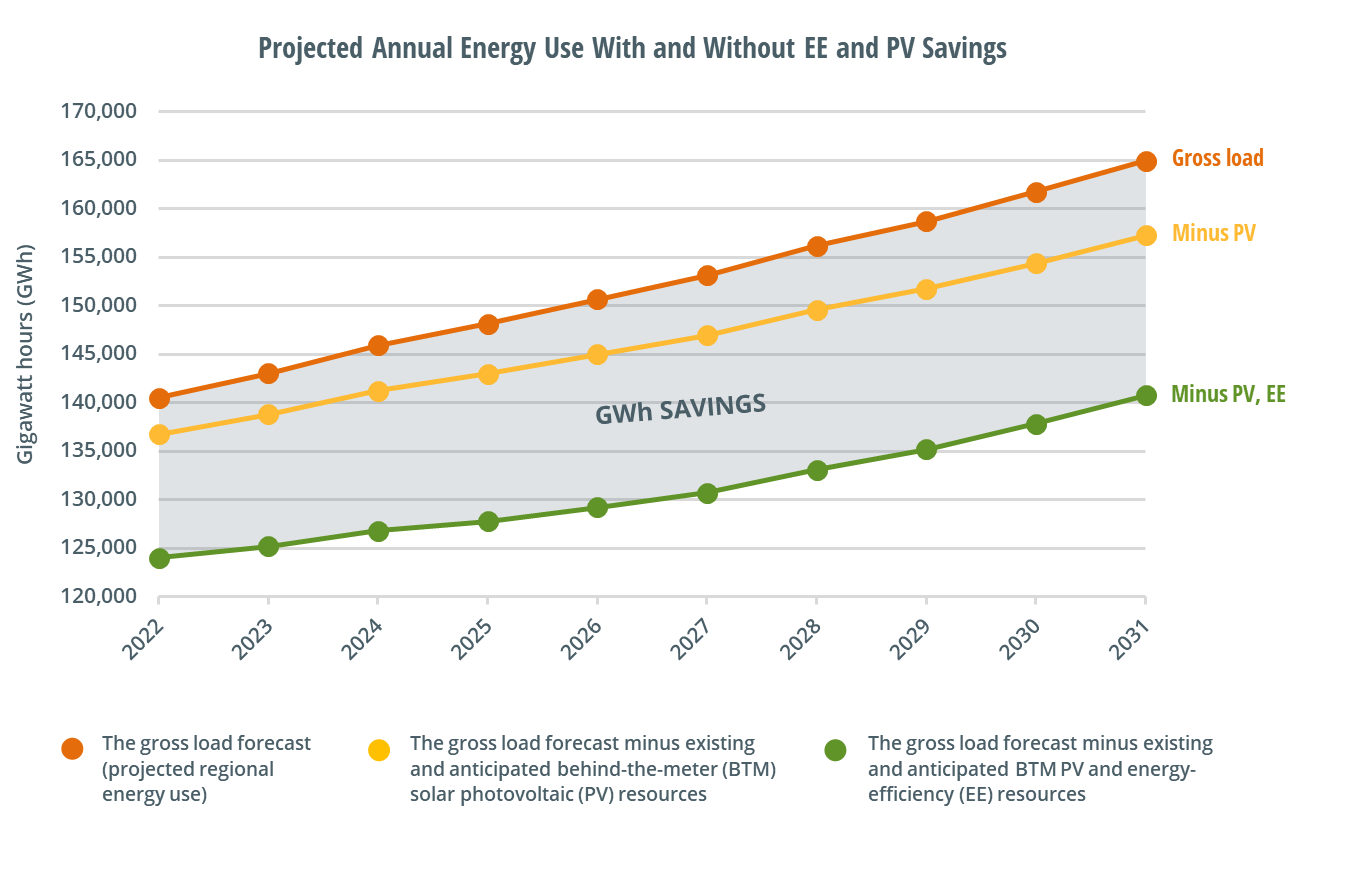 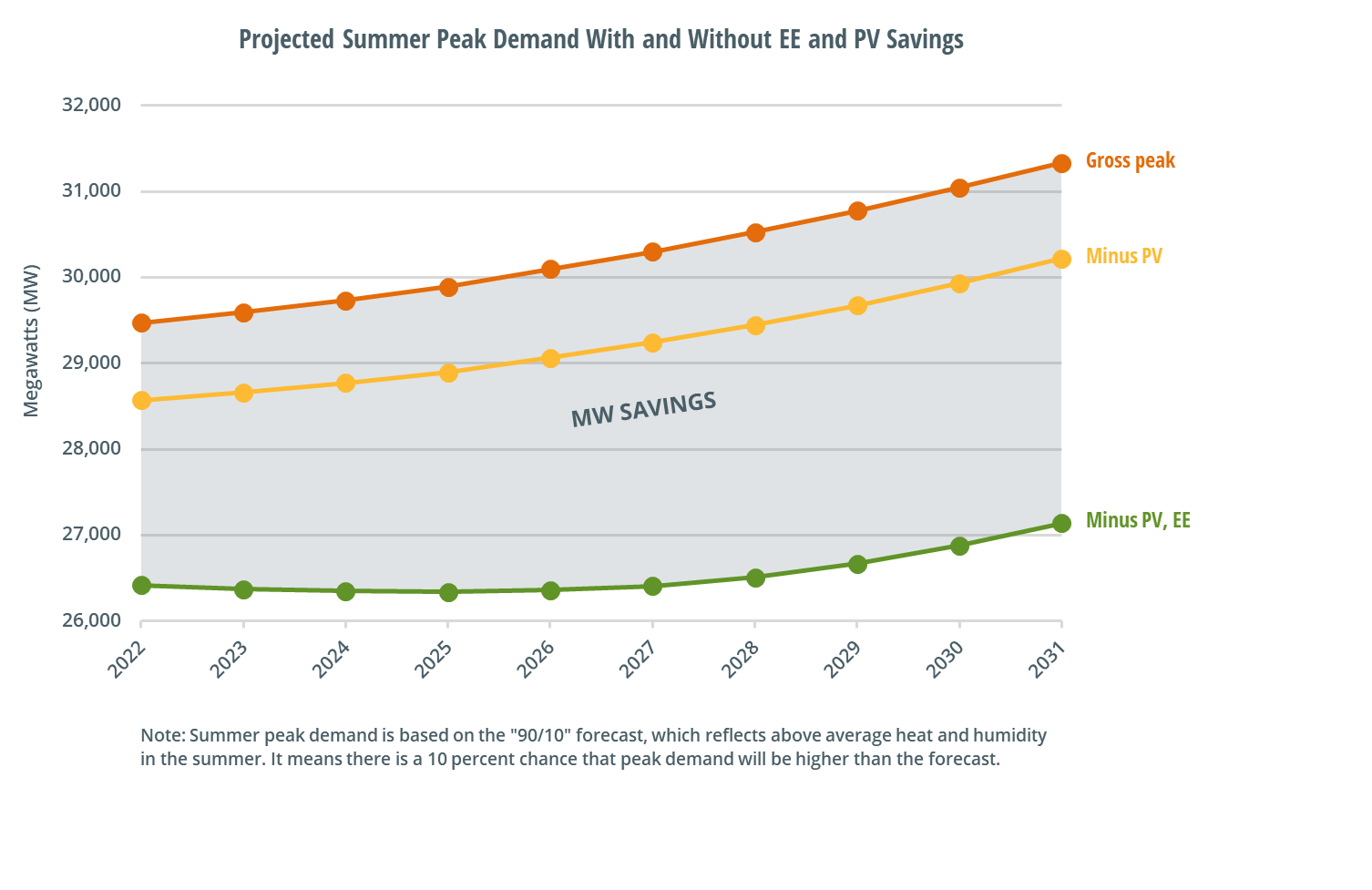