For decades before restructuring, the region’s utilities operated as vertically integrated, rate-payer-funded, regulated monopolies that generated, transmitted, and distributed electricity. Dissatisfied with investments that increased consumer rates while limiting funds for needed infrastructure, the federal government and the New England states introduced a new industry framework in the late 1990s: competitive wholesale markets where privately developed resources would compete with each other to provide the least-cost, reliable wholesale electricity supply. The goals of competitive wholesale electricity markets were to lower costs, encourage innovation, and shield consumers from unwise investments. (Learn about ISO New England’s responsibility for administering the region’s wholesale electricity markets.)

During this time, the New England states also began introducing clean-energy incentives and emission-reduction goals, focusing first on reducing greenhouse gas (GHG) emissions from the electric power industry. Emissions regulations work well with the wholesale markets by making higher-polluting power plants more expensive to operate and providing a reliable means for cleaner resources to come on line in their place.

Over the past 20 years, the market and policy approach has driven change in the direction the states have been seeking: around $16 billion in private investment in some of the most efficient, lowest-emitting power resources in the country, shifting investment costs and risks away from consumers, lowering wholesale prices, reducing carbon emissions, and enabling the transition to a system that emits even less carbon.

Over the past 20 years, the ISO’s continuous study of the transmission system has helped guide cooperative regional investment that not only improves reliability but enables the competitive markets to work as designed. Transmission system upgrades allow the ISO to dispatch the most economic resources throughout the region, allow less-efficient resources to retire, and enable the interconnection of power plants with lower emissions. Upgrades have nearly eliminated congestion costs in the New England energy market and, with the aid of low natural gas prices and other factors, have helped drive down and mitigate “uplift” payments to run specific generators to meet local reliability needs. See the chart illustrating these lower costs on the Key Stats: Transmission page.

When the wholesale markets opened to competition, private companies invested billions of dollars in the development of natural-gas-fired power plants because they used advanced technology that made them run efficiently; were relatively inexpensive to build, site, and interconnect; and their lower carbon emissions compared to coal and oil helped the region meet state environmental policies. As lower-cost, highly efficient natural gas plants displaced older oil and coal plants in New England, wholesale electricity prices declined.

With about 50% of the region’s generators able to run on natural gas, the price of this single fuel sets the energy market price most of the time. The high efficiency of natural-gas-fired generators and the generally low cost of nearby domestic shale gas (which emerged as a resource in 2008) are largely responsible for the significant decrease in the average annual price of New England’s wholesale electricity over the past 10 years. After plummeting almost 50% a decade ago, average wholesale energy prices have remained consistently low since then (see chart below). Lower wholesale prices translate into lower power-supply charges for consumers.

In 2020, the COVID-19 pandemic and the continuation of regional industry trends led to historically-low consumer demand for grid electricity in New England in 2020, setting the stage for the lowest average wholesale market prices since the inception of the region’s competitive markets in 2003. 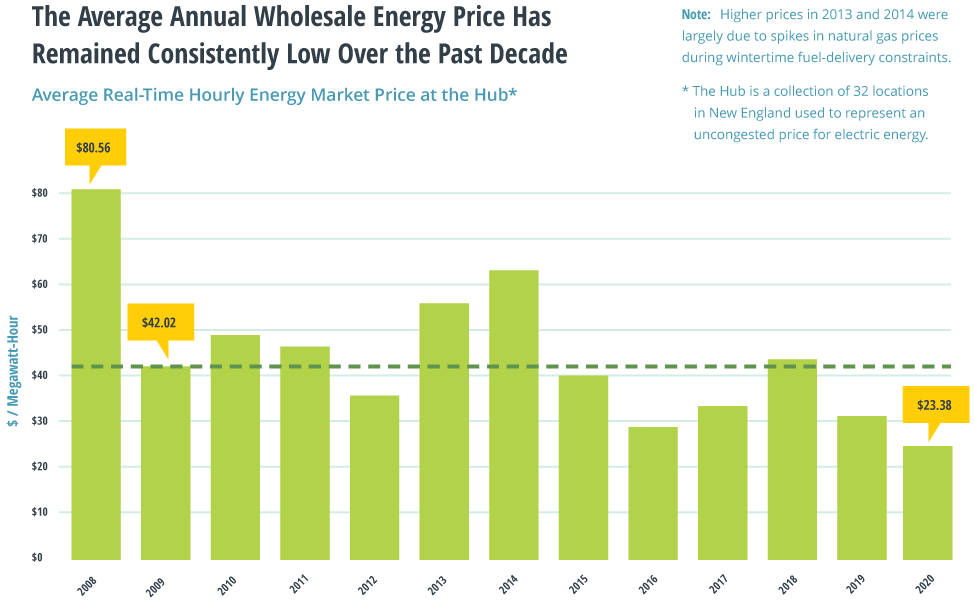 Higher real-time power prices in 2013, 2014, and 2018 were largely due to spikes in natural gas prices during wintertime natural gas delivery constraints. When natural gas is constrained and at a premium, oil generation becomes more economic. High prices are an expected and efficient market outcome when system conditions are tight—signaling a system need. Prices in winter will continue to exhibit volatility reflective of the fuel and weather constraints that limit the ability of power resources to produce electricity during extended cold conditions.

Strong competition has generally kept capacity market auction prices low for most years, but when generation started to retire, the capacity market value over the past few years has increased. The capacity market works in tandem with the energy and ancillary service markets to provide revenue that attracts and sustains power resources needed today and into the future. Over the years, the FCM has enabled the entry of nearly 12,000 MW from energy efficiency, demand response, renewable resources and natural gas plants. And it has provided an orderly process for the retirement of almost 7,000 MW from older fossil units and nuclear plants. 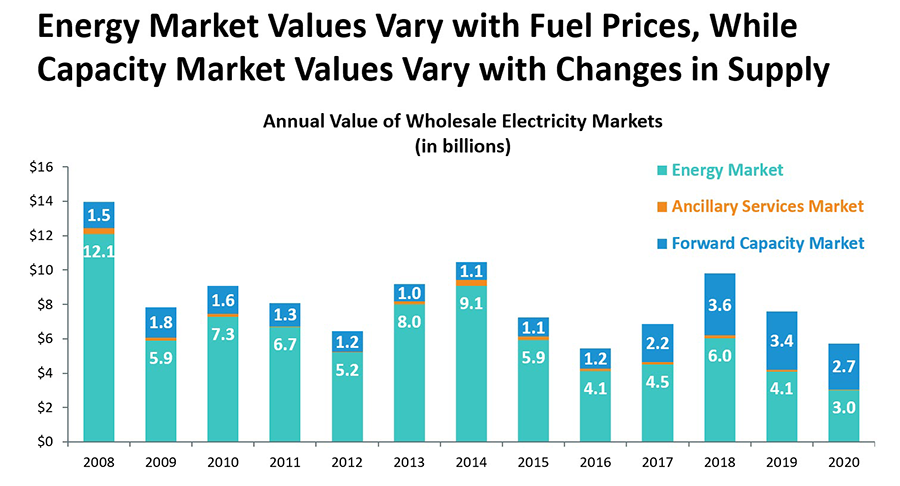 Wholesale costs and retail rates can vary dramatically among the New England states and from year to year, mainly because wholesale and retail electricity markets are used to obtain different products. Wholesale market costs reflect the short-term market for electric energy and wholesale production capacity, whereas retail prices reflect a state’s longer-term, fixed-price contracts for energy; the recovery of the costs to pay for the transmission and distribution systems; stranded costs from legacy, vertically integrated utility investments; and various policy-driven adders, such as funding energy efficiency and solar photovoltaic incentive programs.

So while wholesale market costs have been consistent over time and across the New England states in recent years (ranging from 4.82 cents/kilowatt-hour (kWh) to 4.88 cents/kWh in 2020), retail power supply rates vary significantly across the New England states (ranging from 6.41 cents/kWh to 11.97 cents/kWh in effect on January 1, 2021), due in large part to the different laws and power procurement practices of each state and the utilities within each state. (Source: 2020 Report of the Consumer Liaison Group).

Despite significantly reduced emissions from the power system, action toward meeting economywide GHG goals set by the states is just getting underway. There is a growing desire to accelerate actions needed to meet the climate goals. With deadlines looming, the states are eager for the quicker transformation of the power grid to renewables and for electrification of the broader economy.

Because large-scale renewable resources typically have higher up-front capital costs and different financing opportunities than more conventional resources, they have had difficulty competing in the wholesale markets. Therefore, the New England states are promoting, at varying levels and speed, the development of specific clean-energy resources to meet their public policy goals.

Pricing carbon within the competitive market structure is the simplest, easiest, and most efficient way to rapidly reduce GHG emissions in the electricity sector. Moreover, placing a realistic price on carbon would enable consumers to pay accurate, competitive prices without the risk of paying for stranded costs. However, New England state policymakers and other stakeholders responsible for putting this approach into motion have not pursued a carbon-pricing option that effectively reflects decarbonization goals, neither economywide nor in the electricity sector.

In the absence of a regional strategy for realistic carbon pricing, ISO New England designed and implemented Competitive Auctions for Sponsored Policy Resources (CASPR) to enable the resource transition to take place in a manner that does not compromise reliability. CASPR is a state-of-the-art solution that allows state-sponsored clean-energy resources (such as state-contracted offshore wind) into the capacity market without artificially depressing prices for all other resources. Unrestricted entry of state-sponsored resources into the capacity market could lead to economic distortions, undermine the competitiveness of the market, and cause retirements to happen too quickly. Or, it could deter new investment in other resources that don’t have a contract but are needed to operate the grid reliably (such as merchant investment in grid-scale storage technologies).

The ISO conducted the first substitution auction in conjunction with Forward Capacity Auction #13 in 2019. CASPR will work over time, depending on the timing and buildup of the economic incentives for buyers and sellers. While CASPR is a second-best solution for reducing (or eliminating) carbon from the power sector, the market design demonstrates ISO New England’s consideration of the region’s climate goals and adherence to our mission to ensure reliability through a competitive wholesale market structure.

More About the Region’s Capacity Auctions

Annual auctions in the Forward Capacity Market (FCM) ensure the system has sufficient resources to meet future electricity demand. Obligations to provide capacity are determined through these auctions three years before the commitment period. Resources that clear receive monthly payments during the capacity year in exchange for their commitment to be available to meet the projected demand for electricity. That delivery period is called the capacity commitment period (CCP)—a one-year timeframe from June 1 through May 31 of the following year. As the year of need gets closer, monthly capacity auctions also take place.

1 Not counted as new is the demand-resource type once known as real-time emergency generation (RTEG). RTEG resources, which participated in FCAs #1 through #7, were treated as existing capacity and capped at 600 MW.

3 This total includes new generation acquired in both the primary auction (783 MW) and substitution auction (54 MW).

More information can be found on these pages of the FCM Participation Guide: About the FCM and Its Auctions and Installed Capacity Requirement.